in Field studies and research
Reading Time:2 mins read
662 7
A A

The pre-state subsidiary identities; doctrinal, ethnic and tribal became more pronounced during phases of the Syrian revolution in conjuction with the upsurge in violence of the current war between Assad regime and Free Army factions. Many tribal strife emerged in eastern Syria and particularly in Deir Ezzor as the consequent conlicts demonstrated that the clan is one of the social dynamics and standards in the east. Even though some observors attribute the resoration of tribal identities in the frame of the Syrian revolution to the consequneces of the policies of the authoritarian state. However, others see that the Jihadist trends nearby the tribal areas led to the emergence of those identities as they expanded outside the frame of the state. Nevertheless, those identities were not absent from the local communities, and especially in Deir Ezzor, eventhough it was not prominent on media. Those identities were exitisting in different images and levels throughout the economic and social activities whithin a coalition frame with the current regime which did not recognize them officially, but it manipulated it in accordance ith contradictory policies. The maximum level those identities reached is the emergence during a weak and erosion of the state power. This led them to be a social, political and military dynamic in a prominant manners. This make us think about the reasons and dynamics of this scattered emergence and to reconsider the policies of the successive regimes that ruled the country, along with the establishment of the Syrian state, expecially during the era of Assad regime, and excluding the triabl areas from development projects. 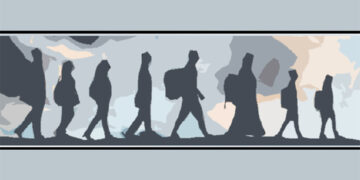