in Special Reports
Reading Time:2 mins read
51 1
A A

The United Nations declared[1] in April 2nd 2017 that the current war in Syria caused displacement of 13.5 million people including those who were displaced inside Syria many times. This rates Syria on the top of the list of internally displaced people. Such case of displacement with this enormous number has a parallel prison which is imposed on the civilians by some dominating forces on the ground, especially in eastern Syria. Deir Ezzor, Al Hasakeh and Al Raqqa have close nature, dialects, traditions and tribal society. All of them was marginalized by the governing authority, which was considering them as “developing regions” before 2011 as they were characterized by the poverty of their locals and the simplicity of their style of life until the war-years among the belligerent forces imposed a geographic segmentation among their locals along with inhumane treatment among the tribe sons.

“Islamic State” group controls most of the area of Deir Ezzor and Al Raqqa governorates. The group prevents the civilians in its held areas from leaving towards areas that are held by other forces such as regime forces, opposition factions, and self-rule held ones. This forced thousands of civilians to risk their souls and depend on local smugglers to flee towards Al Hanakeh mainly despite the excessive amounts they have to pay.

Most of people who have to leave the “Islamic State” held areas by smuggling routes are patients, women, children, and elderly along with some young men who look for job or better future away from the group decisions that control the details of the civilians lives, additionally, the difficult economic conditions that got worse after the control of the group. 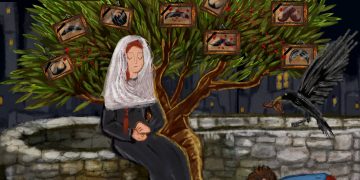 The Impact of Revenge on Women in Deir Ezzor Governorate